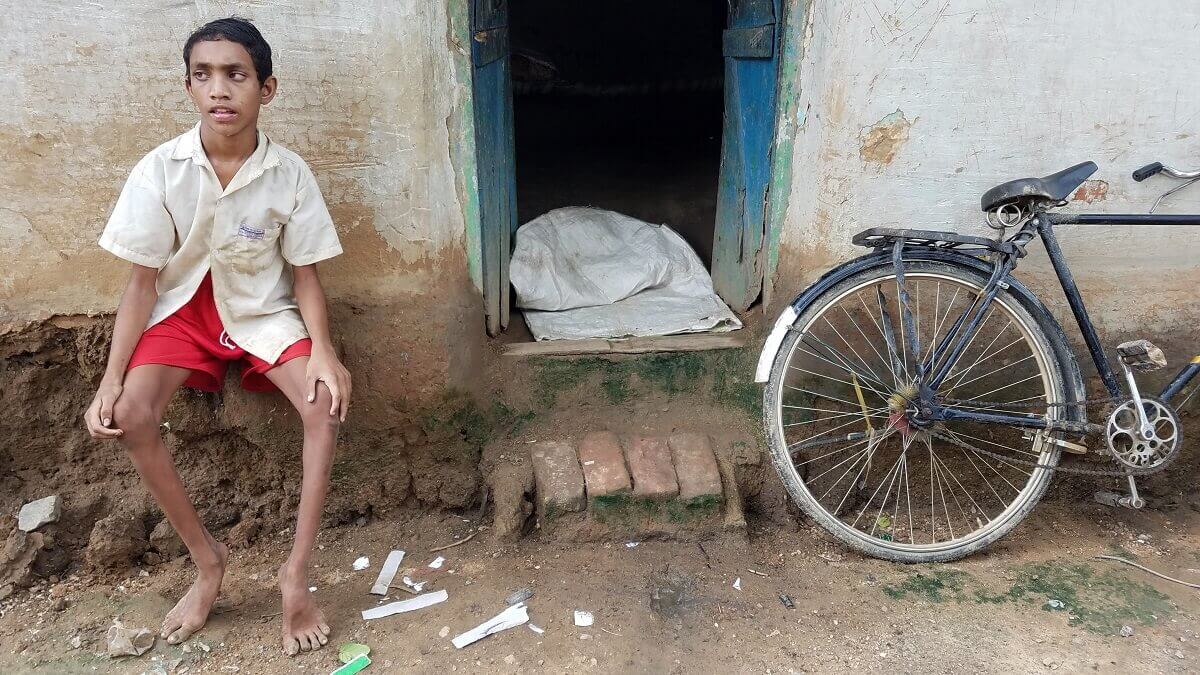 The adivasi village of Jadugoda in Jharkhand is home to the Santhals, Gonds, Mundas and Hill Kharia. This small township is known to provide uranium ore, the fodder for India’s nuclear dream and Jadugoda’s nightmare. Read on as @karmatraveler , whose initiative @adivasilivesmatter illustrates untold stories of children who are being born with severe disabilities at the cost of development. #adivasilivesmatter 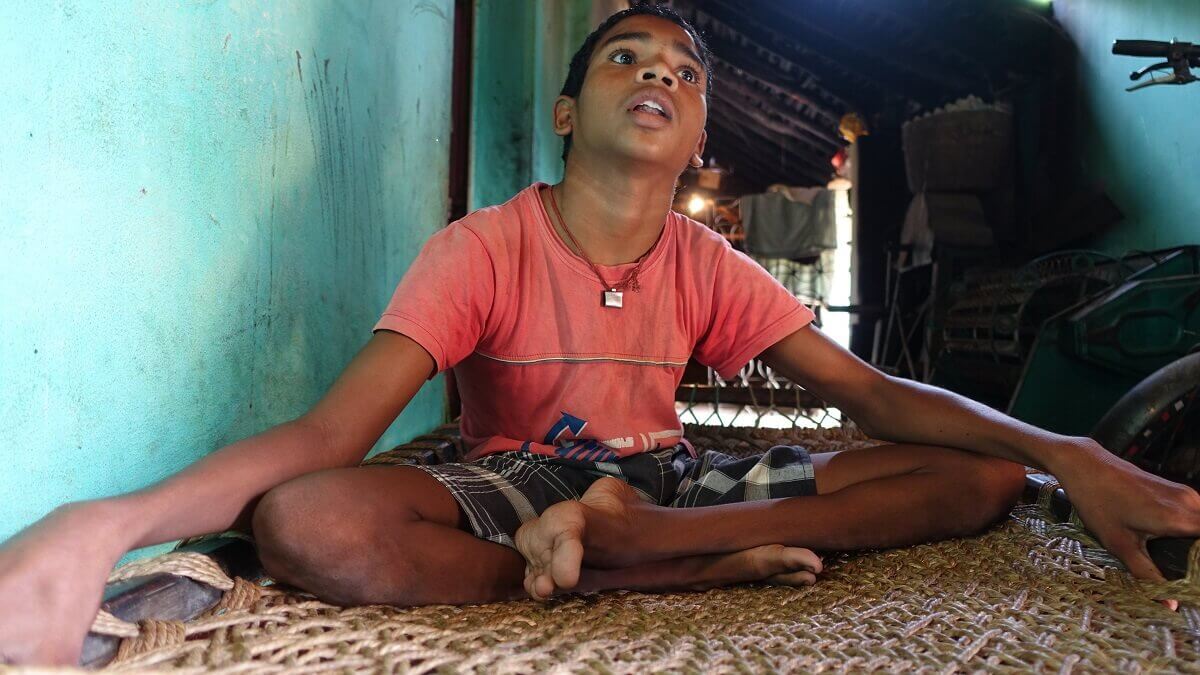 The first house is that of Sanjay Gope, who is 12 years old and developed severe muscular dystrophy at the age of 4. This condition meant that his movement was severely restrained and so was his speech. I notice how most houses in the village have short doorways that force you to bend while entering. When I entered, I saw that sitting cross-legged on a charpai on the right was Sanjay, a smile beaming from his face. “He has been like this for the past 8 years, restricted to this cot. One of us has to be here constantly, we cannot leave him by himself,” says his grandfather. I try to converse with Sanjay, but all he manages are muffled sounds. I show him some of the pictures that I have taken of him and he laughs with joy. Photographs, I think, connect people across languages, age groups and cultures. His grandfather shows us some medical reports and prescriptions. 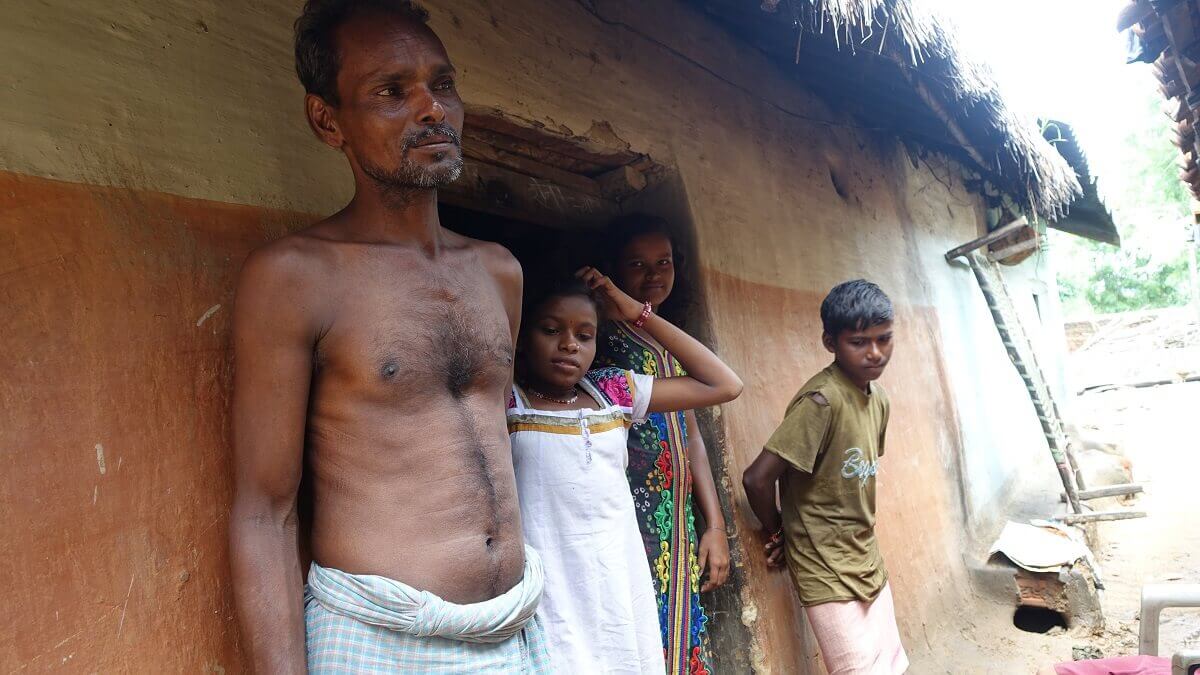 Across the muddy street was the house of Parvati Gope, a 17-year-old girl who suffered from Lumbar Scoliosis, an S curve formation of her vertebral column. Parvati’s photos have been widely used by the anti-radiation poisoning movement, and I recognise her from the handouts I had seen earlier. Her father is rather annoyed as he mentions that a month ago, a news channel from the south of India had come and filmed a documentary on his daughter, but nothing came of it. “Everyone comes and shoots her pictures and videos, but no one ever does anything about her condition. She needs to be treated and we need money for medicines. I cannot afford her medicines forever.” Both these children display conditions that often occur in cities too and I am not fully convinced of the connection to nuclear poisoning.

Earlier that morning I was drenched in rain as I reached Jadugoda’s main chowk on cycle. The chowk is distinctly marked by the statues of Seedu and Kanu. This tribal revolutionary duo fought against the British for the rights of their Santhal community and against Zamindari in 1855.

“Where did you get all these posters from, Ashish?” I ask. “I attended these radiation poisoning conferences and events. I am the youngest, and quite possibly the only photojournalist from Jadugoda. Most photographs that you see on the internet about Jadugoda have been clicked by me, and I have taken the reporters and journalists to visit the community. I was invited to display these photographs in Brazil, Canada and Japan by the anti-radiation poisoning activists there.”

“How did you come to take these pictures, and why are you highlighting the issue of tribals affected by radiation poisoning?” my curiosity was growing by the minute. “Wait,” he said. “First let’s go to the villages, then we’ll sit and talk. The villagers are busy in paddy transplanting and you’ll get them only during lunchtime, don’t miss the opportunity.”

I am introduced to Anupam Kar, who is in the 12th standard and has been closely working with Ashish for a couple of years. He hails from one of the villages, Bango, which we are about to visit. I hop on the bike, as this frail kid barely manages to keep the bike steady and we head to the villages a few kilometres away. We first visit the Government school in Bango and meet the headmaster to enquire if there are any children with physical deformities, to which he promptly replies in the negative. Last year, some doctors from Calcutta had conducted a medical camp in the Bango Govt. (Zilla Parishad) school, during which these cases were identified by them and have since undergone several tests and treatments. The principal’s outright denial of their presence was a little odd, but not entirely unexpected. We then decided to head to the village Bango directly, since Anupam knew the homes of some of the physically deformed children.

The next house is that of Rakesh Gope, a school-going 13-year-old boy suffering from muscular dystrophy too. Only, in this case, he is extremely active and walks, albeit with severely arched feet and soles that are arched upwards, he also cannot talk normally. He has a brother and sister, who are both normal. The saving grace is that he goes to the same school as his siblings and that normalises his life to some extent. “How long can we provide for his medicine? We don’t even know how long he will live,” his father opens up to the miseries of providing for this medicines with a meagre farming income. He makes Rakesh walk and run for us, parading his condition for me to shoot. As bad as I felt to watch, it was necessary to document this. By now, I am beginning to feel that something is wrong with the fact that too many similar cases are being detected in a very small area. 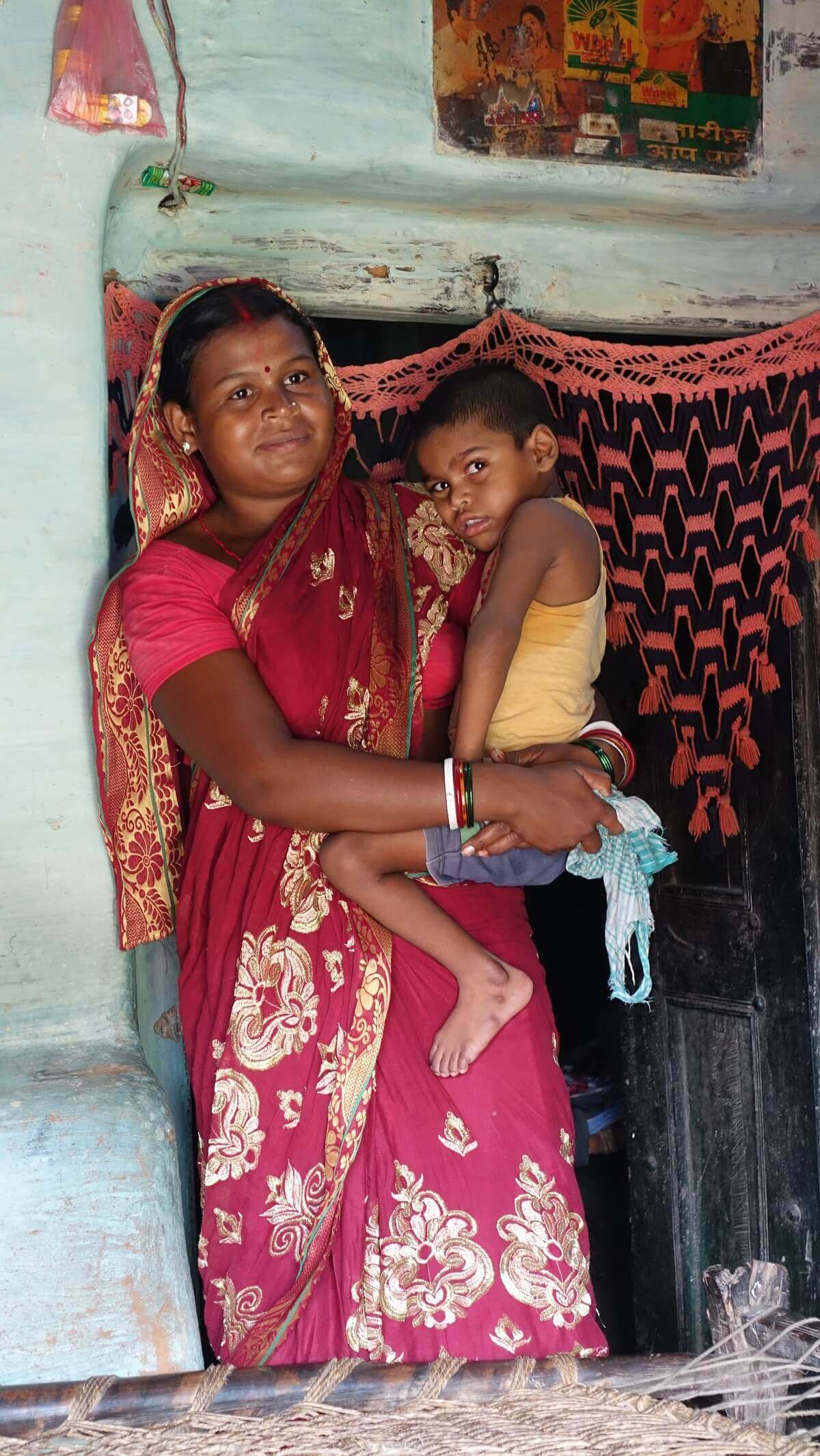 3-year-old Kartik Gope’s home is next. This sweet child has been having seizures since birth and is developing muscular dystrophy too. The mother and grandmother are quite hapless as I speak with them. The mother keeps dabbing her child’s face as I take pictures. She brings out the reports of CT scans and doctor visits. Incidentally, all the families with these symptoms have visited just one particular clinic in Jadugoda, which is in the UCIL (Uranium Corporation of India Ltd.) complex of Jadugoda. Further tests are done mostly at the Chaibasa hospital, while those who can afford it, go to Jamshedpur.

Word of my visit to the families with physical deformities spread in the village and a lot more families came to Kartik’s home. A girl whose right leg was substantially shorter than the left one, a lady and another man, unrelated, who are deaf since birth, mothers who have faced miscarriages or suffer from sterility. All of them wanted me to document their stories, each with a hope that at least I will relay their story to the government and help them avail some benefiting scheme.

I could feel myself slowly sinking, to see so many cases of physical deformities in such a small population of about 2400 people, all in one village. The curiosity of seeing first hand, the effects of exposure to radiation poisoning had caused my stomach to churn, as I helplessly documented one case after another.

We see rain clouds taking over the sky and speed away to Anupam’s house from there. The downpour begins just as we make it to the house. We see hens flutter towards a shelter, women and girls washing clothes at the hand pump run to take cover. A shepherd makes a makeshift umbrella from the leaves and twigs that he was carrying back, while his goats walk, surprised at the sudden action in this lazy village. Anupam’s mother came from inside the house offering me a glass of water, as I stood under the overhang of his tiled roof, marvelling at the village that had assumed a sense of urgency after the rush of rain. I thought for a moment, debated in my head whether I wanted to drink the radioactively polluted water of Bango village, and then took large gulps of it. I even amused myself by shooting a video about it, but not for one second did the gravity of the situation leave me. Here I was, thinking twice about drinking the polluted water once, whereas these villagers have spent the last 4 decades drinking, washing, bathing and farming in this polluted water and soil and air. 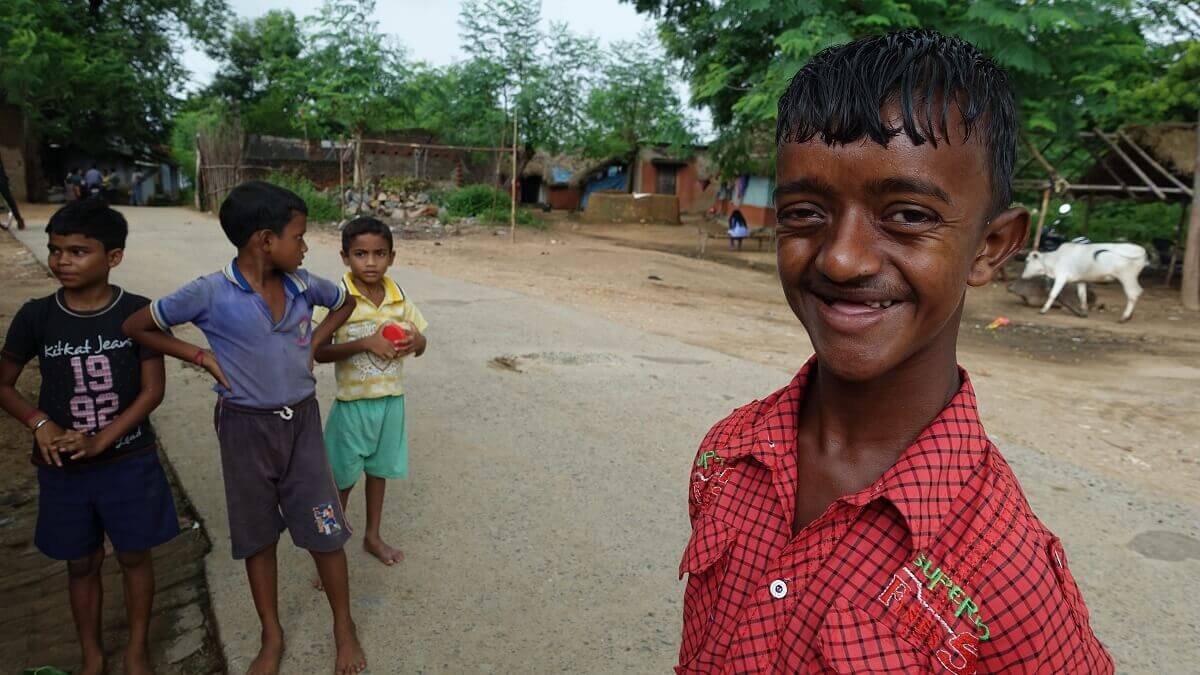 Standing across from me, under an umbrella, his red checked shirt a stark contrast to the grey sky, was a boy with a disproportionate and slightly odd body. I remembered his face from the article in Hindustan Times by Chinky Shukla. I had a brief conversation with Haradhan Gope who was going to the farms to get his cattle back. By now, I had begun to preempt the answer when I asked the people why these conditions had occurred. Few of them attributed it to radiation exposure, but mostly claimed it was their ill fate. 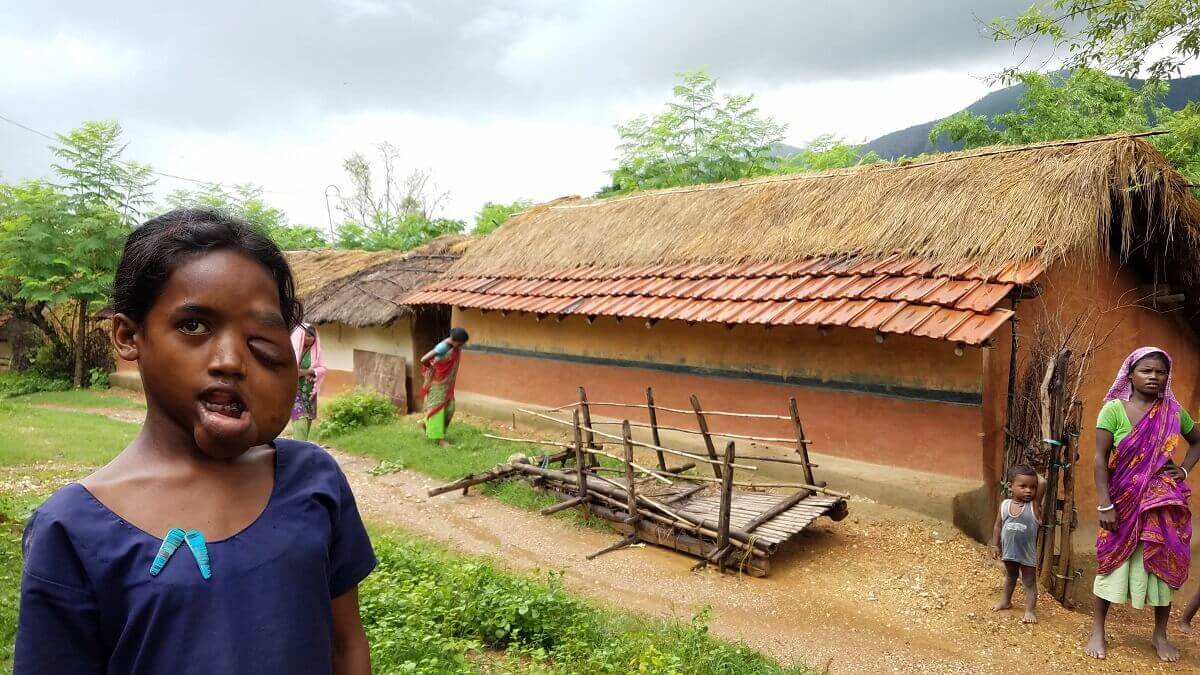 Our last visit was to Dungridih village, Anupam prompted in my ear that no one from the outside had actually visited that village before me. It took us some asking around to find the house of Anamika Uraon, and when we finally reached her house, it was locked. I was disappointed that we had come this far and would not have a chance to meet the ‘girl with the scary face’ as she was called. The tribal villagers nearby started gossipping among themselves while we tried to see if someone could relay a message to her. In some time, a girl in her blue and white school dress came running towards us, while we sat on the ledge of her house.

Her hair tied at the back bounced as she came running towards us upon receiving word. It was only as she came closer that her full face and its features became clear. The right side of Anamika’s face was like any other girl of her school-going age, intent eyes filled with curiosity, a shy smile for strangers quickly turning to a chuckle as a neighbour passed a remark. However, the left side of her face had bulged into a cancerous outgrowth of cells and tissue. The flesh on this side was so enlarged and weighty that it was drooping down. I remember feeling stunned as I stood there, talking to this girl, for whom, it was inexplicable what was happening to her. Just last year, when she was seen in the school medical camp for the first time by Ashish and Anupam, her condition was not as bad. In one year, it had severely deteriorated. I shuddered at the thought of the pain she faces.

The cancer of denial, apathy and evading responsibility of the radiation pollution reflected on the face of this innocent girl. She was clueless about what she had done to deserve such a rude shock. Her tumorous face was getting etched in my memory, in the deepest chambers of my brain where all that I fear about the world resides. I had no idea then, that this face would come to haunt me for the longest time, making me question my own privileged life, how we take our consumeristic life and its impacts for granted and what it meant to be a responsible, accountability seeking citizen of our country.

The dark rain clouds were beginning to reappear on the horizon as we left from Dungridih for Ashish’s home. The shadows in my mind and heart had grown to its darkest, mirroring the weather outside. My question to Ashish earlier in the day, on why he decided to take up the fight for radiation pollution had found its answer.