THE IMPORTANCE OF PLAY

For Sakina, a parent residing in the slums of Seemapuri in East Delhi, play has always been a frivolous activity that children engage in. Her views aren’t an anomaly. She, would rather that her children invest their time first in education, or skill building, or something that gives them a chance to a bright future, in what in her experience has been a cut-throat, difficult, competitive world. To her, childhood was supposed to be invested in hard work to gain skills, and not in play.

Play, on the other hand in overall early childhood development, is widely recognised as one of the most powerful ways to support physical, cognitive and socio-emotional development in the early years. A supportive adult/caregiver guiding a child through play can unlock transformative early learning experiences which build readiness, motivation and a foundation for future learning.

This potential goes undeveloped due to widespread lack of knowledge among caregivers. Too often, caregivers undervalue play or believe that they lack the time, resources and skills to be effective play partners with their children.

In 2016, Sesame Workshop and the LEGO Foundation, two organisations deeply committed to promoting the power of play to create transformative, hands-on learning experiences, formed a partnership to address this need with a multi-country initiative – Play Every Day in India, South Africa and Mexico.

To begin with, Sesame Workshop and the LEGO Foundation convened the Global Advisory – a multi-session meeting over five days in Billund, Denmark. Selected play experts and providers, key LEGO Foundation staff, and Sesame Workshop New York and in-country teams (India, Mexico, and South Africa) participated in discussions to shape program thinking and design for the LEGO Multi-Country Initiative. Through the initial workshops and discussions during the Global Advisory, Sesame Workshop aimed to align key objectives for the program’s target audiences, begin to inform guiding messages & activities for prototype Play workshops, and gain insight into cultural and contextual variations in play with a key focus on all participating countries.

Since it was the first of its kind intervention globally, SWI wanted to stay closely involved and monitor the testing phases hence chose Delhi’s low resource communities as the program area. As the project progressed, we convened a subset of the initial advisors as well as additional experts to inform decision making and refine project strategies through a local advisory and undertook a thorough need state analysis of the target communities to inform the program design, approaches and goals. With each testing phase we continued to gain understanding of the need, opportunities and barriers of the target communities and refined our approach & messages based on that.

Through our Play Every Day campaign, we wanted to change the notion that play is a frivolous activity. We wanted to show parents that something as simple as spending 20 mins to an hour playing with your child everyday can be a powerful tool to cement and strengthen family structures which lead to better learning abilities of children. 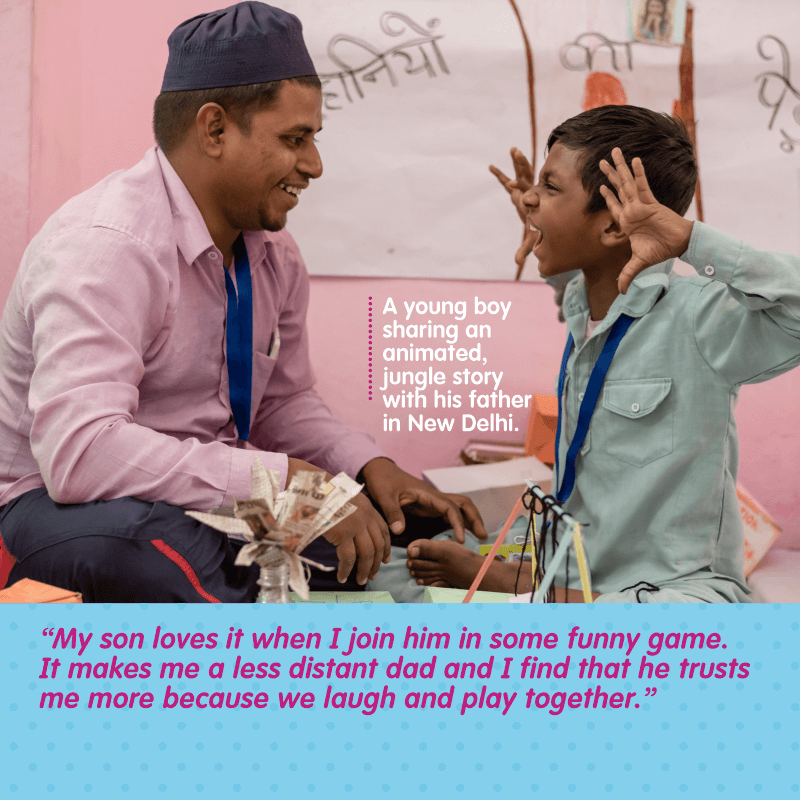 We also wanted to empower caregivers to effectively guide children in learning through play. We found that a lot of parents in the community didn’t have the confidence to play with their children. Given that these were low resource communities, they didn’t think they could afford expensive toys for their children. Moreover, they saw themselves as disciplinarians rather than support systems. We wanted to change that dynamic and create safe spaces for children inside the homes. As one of the parents who participated in the program explains, “We always thought that toys would be expensive. Who would have thought that playing with material lying around in the house would keep us busy and happy for hours.”

Sakina sheds more light into this. “My daughter would never tell me when something went wrong at school. We just didn’t have the space for that. I would scold her when she started acting out.”

One of the key objectives that we had in mind while crafting this campaign was that there needs a shift in mindset about play as a learning tool globally. Play shouldn’t be looked at as a frivolous activity with limited outcomes, but an essential pathway for social transformation by helping kids grow smarter, stronger and kinder.

We were aware that this campaign is one of a kind, and that we had the opportunity to be pioneers in a new movement with a new school of thought, espousing the simple truth that play could be an agent of social change.

THE DEVELOPMENT OF THE ‘PLAY WORKSHOP’ MODEL

To ensure a contextually relevant and effective play workshop format, Sesame Workshop India followed an iterative process to test and refine the  messages and model with each phase. Through the activities, play facilitators conveyed key messages on the benefits of play with the intent of building caregiver confidence in their ability to play at home.

We continued to test and refine our program implementation model and content & training approach with each phase. In the Alpha phase , we tested different platforms to reach out to parents such as using phones with demonstration videos on how to play with your child and link play to learning; community viewing & workshops with community facilitators; play workshop with facilitators & home visits model.

We tested and arrived at the ‘play workshops’ model with community facilitators. Families liked the ‘human touch’, coming to the workshops allowed them a break from their routine and place for them to have fun without thinking about anyone looking or ‘judging’. The community mobilizers proved more effective as families could relate to people from their own community and it was a great motivation also. 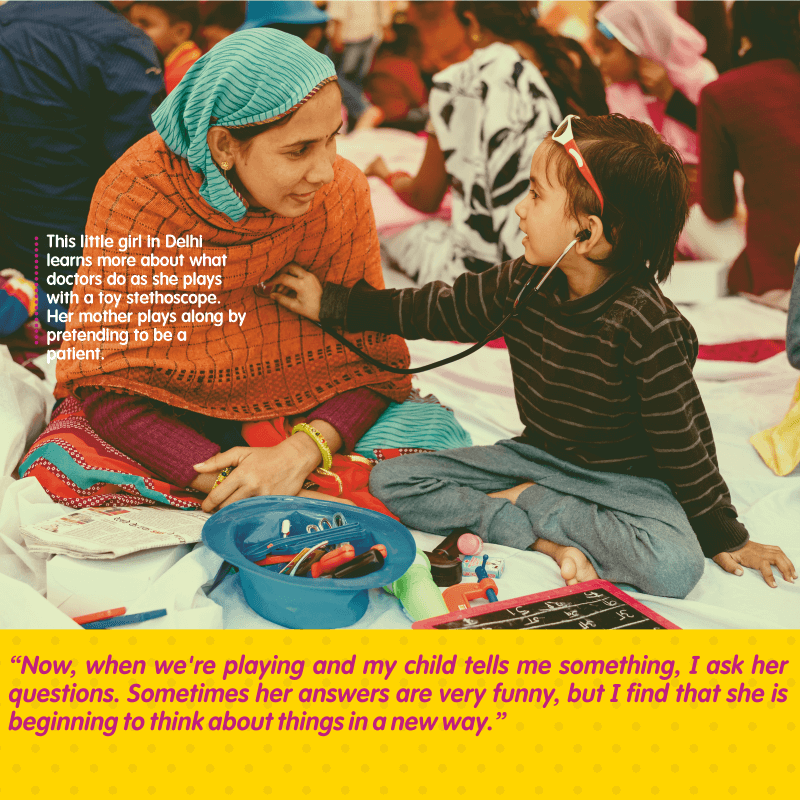 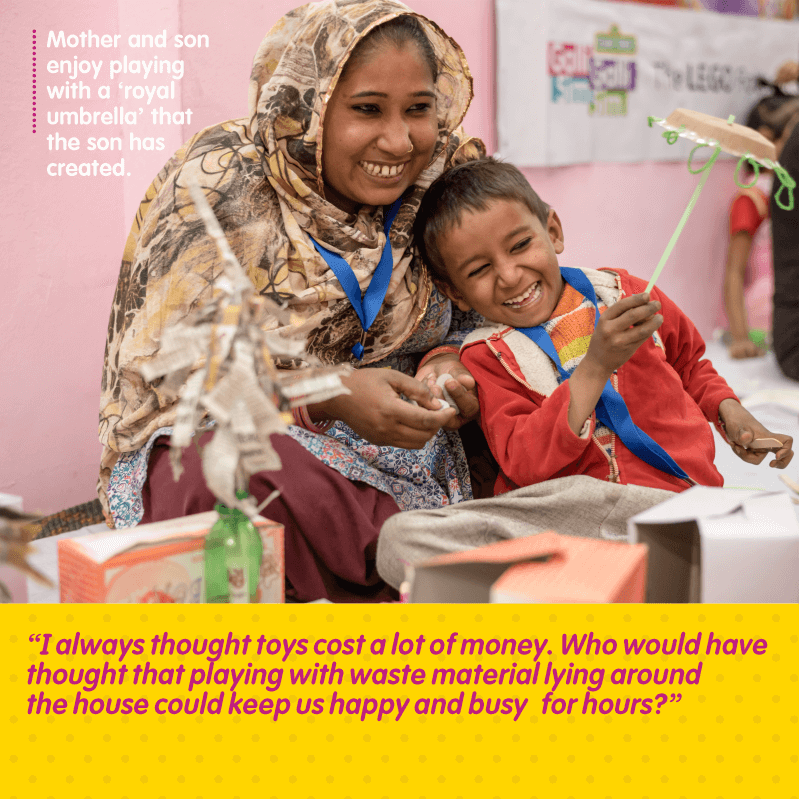 A quasi-experimental impact evaluation was designed to measure the  effectiveness of the Play Every Day program in generating knowledge and behaviour change on caregivers and their children aged 3-6 years. The results show that:

“Did you play with your child in the last week?”

I use common household items to play with my child – strongly agree.

Caregivers participating in Play Every Day reported an 8% increase in confidence as play mentors of their children.

“I have the knowledge and skills to be a play mentor to my child.” -Strongly Agree

The results of the impact evaluation point to the tremendous potential for a programme on play behaviours in low-resource settings, with significant benefits to both caregiver and child. Play became an important tool to bring about lifelong learning and its recognition was felt across various stakeholders of Early Childhood Development.

As caregivers learn to bond and share with their children through play, the program has the potential to enhance the stability of family structures and can surely help a generation of children grow smarter, stronger and kinder.

This program was made possible by the generous support of the LEGO Foundation.