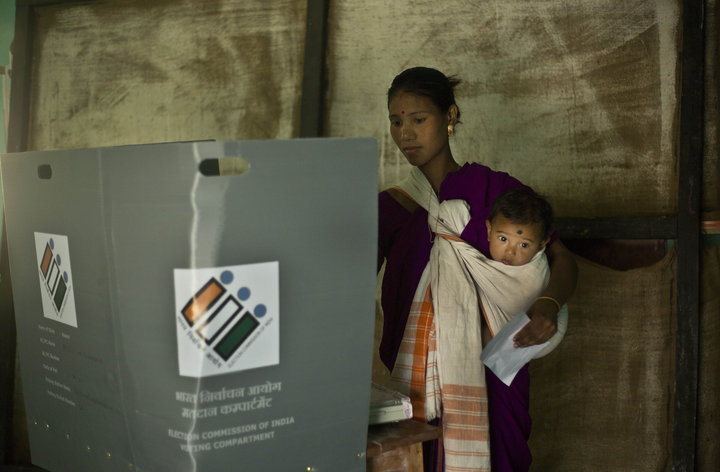 Children don’t vote- but you do!

Let’s vote for our children to grow up with Tolerance and love.

Let’s vote for Constitutional Rights for ALL children Let’s vote against violence with impunity, cuts in funding for food, child care, education and killing in the name of religion and cow-vigilantism.

The upcoming election is crucial for the future of children in India, who are in a state of crisis.

Our Constitution guarantees all children the right to early childhood care, nourishment, and education, equal opportunities and facilities to develop in a healthy manner and in conditions of freedom and dignity. The constitution also promises protection to our children and youth from violence and exploitation, from being abused or forced by economic necessity to enter occupations unsuited to their age or strength.

There is no doubt that in the last five years, there has been a massive erosion of these Constitutional rights and of the wellness of India’s children. Violence against India’s children has increased disturbingly, while funds to support the basic needs of the most marginalized children has significantly decreased. Crime against children has risen by 16.39% between 2014 and 2016. Union Budgets for children have declined from 4.76% of the total allocations in 2012- 13 to 3.25 % in 2019-20.

Child protection: In 2016, the Global Slavery Index reported that India leads the world in modern slavery, sex, and labor trafficking. Children from vulnerable and marginalized groups have never been so insecure. Intolerance is being promoted actively. These children live in fear. Not only do they suffer from malnourishment, hunger and exploitation, but also have grossly inadequate childcare, and no practical access to education, increasingly children are victims of targeted and extreme violence like sexual abuse, trafficking and ‘cow lynching’.

As horrifying as it sounds, the rapes of children have increased by 82%. Equally horrifying is the fact that many of the child rapists continue to enjoy impunity, especially if the victims are Muslim, Dalit or OBC or other marginalized groups, as illustrated by the Kathua, Unnao and Muzaffarpur, Deoria and other shelter home cases. Cow vigilantes have killed with impunity a 12-year-old Muslim boy traveling to an animal fair in Jharkhand and two other Muslim children in Dadri found with two buffaloes in their truck. The 12-year old was beaten to death and hung from a tree. The fanatical rapists and murderers have been protected and defended simply because of their party and religious affiliation.

In the meanwhile, the introduction of the death penalty for the rapists of children has put them in greater danger. Half of India’s children are sexually abused.

Research demonstrates that very often those who abuse the children are family members or caregivers, Thanks to the death penalty, they often silence the children with great brutality, sometimes even murdering them, to conceal evidence.

On top of that, a clause was introduced in the Child Labour (Prohibition) Act of 2016 allowing children to work in “family enterprises” making at-risk children more vulnerable and confining them to caste-based occupations.

In another regressive measure, the Juvenile Justice Act was amended to allow for children, between the ages of 16 and 18, to be tried as adults in case of heinous offenses. Research shows, putting children into the criminal justice system further criminalizes them. Child rights activists and international children organizations say these children need education and an opportunity to reform and rehabilitation.

Education: The chances of a disadvantaged child fighting for a better future are being further smothered as free schools are being shut down and scholarships for higher education are being de-funded. Budgets for post matric scholarship scheme for SCs has been reduced by 60%; for girls’ hostel for SCs by 40.32 %; for post matric scholarship for OBCs by 17.35% and boys and for girls’ hostel for OBCs by 40%. Children with disabilities still ‘dream’ for inclusion.

History and science textbooks have been rewritten and now blatantly misrepresent historical facts by replacing them with myths. Textbooks and courses are re-enforcing regressive gender stereotypes. Girls are being groomed in some schools and universities to be “trained” in wifehood rather than career aspirations. In a Madhya Pradesh University, a three- month course on wifehood was introduced last year. A recent report by World Bank reveals that educated girls are dropping out of the workforce because they are being groomed to aspire for marriage first. A BJP candidate in Rajasthan even promised to legalize child marriage if elected!

Nutrition and childcare: 38% of children under age five years are stunted; 21 % of children under age five years are wasted, and 36% of children under age five are underweight –all signs of malnutrition and hunger. An estimated 8,143 crèches have closed between 2013-14 and 2016-17, and the number of women and children benefiting from the National Crèche Scheme has been cut by 39% (from 474, 775 to 290,925). Anganwadi workers who cook and care for millions of children as part of the Integrated Child Development Services, the world’s largest infant and pregnant mother nutrition programme, are paid one-tenth of the legal minimum wage. They recently went on strike saying that the government wants to replace the food cooked by them with packaged products made by MNCs. They have not been given food supplements for the last year in many states.

May we take a moment to remind our nation that children have rights as citizens of India, to equality, to personal liberty and due process of law; to nutrition and health and education; to being protected from being trafficked and forced into bonded labour and of course the right of minorities and of weaker sections to be protected from discrimination, social injustice and all forms of exploitation.

Any attempt to demand better for our children is side-lined. We want this to change. We don’t want children to be abused and exploited, forced to work, not go to school, neglected or be discriminated against. We want resources and measures for education, child care, and child protection.

Most of all, we want our children safeguarded and their rights as equal citizens of India to be protected.

Let’s vote for all rights for ALL children. India’s four hundred and eighty million children deserve better. They can’t vote today, you can.

Let’s vote for love, not hate.